Angry Birds is the popular physic based game for PC,iPhone,Andriod and Symbian mobile phone . I have made a list of some free physic based catapult flash games that are fun to play and can be regarded as close alternative to angry birds. Since most of them are flash game they are OS independent and can be played on Windows , Mac or linux based computer. 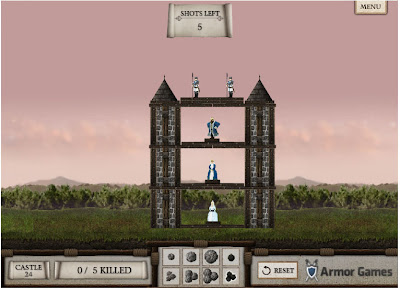 Crush the Castle 2 is the second part of game Crush The castle . Unlike in angry bird in this game you will have to use catapult and destroy enemy’s castle. New weapon are unlocked as you complete achievements .

This game is also preety much like angry bird. You will be playing a role of a mob and you have to destroy the monsters using the cannon.

3. All Rabbits Must Die

This game is pretty much like of angry bird. Jack and his brothers’ foods are stolen by rabbits . You have to throw Jack brother’s against rabbit and kill them to win.

You have you defend your city and castle against the enemy by shooting at them with a huge canon. After each level you also get to upgrade it with the points you gathered.

Sieger is yet another game by Armorgames , the game play of this one is different than of Angry Birds and games stated above. You have to destroy the castle by hitting on a certain part of castle. You will have a limited ammo and destroy the castle without harming a hostage (in certain stages).

This game is bit different from above game because it is not “destroy the castle” game. That goal of this game is to land one of the human into the cooking pots in each level. The game’s graphics is colorful and fun and somewhat similar to Angry Birds.

In this game you control different types of rockets to blow up villagers and the stuff around them. It has a 1337 physics-engine so you can use crates and such to kill people.